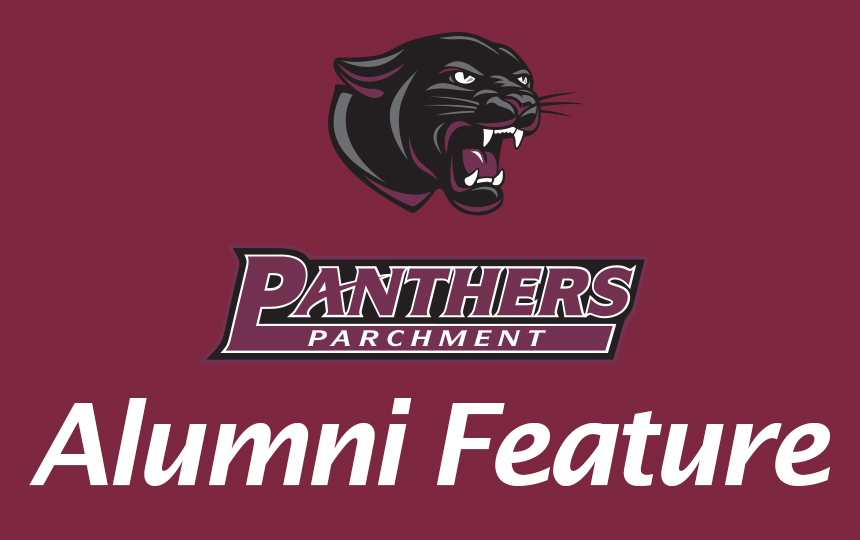 Kaury Kucera, who wowed the international physics community with her research when she was a high school senior at Parchment and the Kalamazoo Area Math & Science Center, is still leaving her mark on the world of science more than two decades later.

Kucera, whose last name was Eisenman when she was at Parchment High School and KAMSC, from which she graduated in 2000, is currently chief scientific officer at Valisure, an independent lab based in New Haven, Conn., that does quality testing on drug products.

The relatively young company — it has been around since 2015 and recruited Kucera three years later to manage its lab and the people who work in it — has already scored big in finding issues with commonly used products.

“Coming into a small business and building a team was really, really rewarding,” she says. “I really appreciate working with a small team of people who are passionate” about what they are doing.

At 38, Kucera is excited about the company’s work to protect people from potentially dangerous pharmaceuticals, and glad that her emphasis during her career has evolved from physics to biochemistry.

“I wanted to have a more direct and personal effect in helping people,” she says.

“I love what I’m doing now so much it’s almost sad to think it could ever change or end,” says Kucera, who left a teaching and research position at Yale University in New Haven to take her current job. “There are days I kind of feel I’m living the dream now.”

Kucera says her goal is to continue to build Valisure’s reputation for advocating for consumers by testing the integrity of existing pharmaceuticals.

“What I’m doing now feels different because change is happening,” she says.

“We are the only lab that we know of that has positioned ourselves to do testing, … (as an) accredited testing laboratory, … for only finished products.

“We’re unique; we haven’t found any company like us. We’re kind of like the CARFAX of prescriptions.”

With a mission “to bring transparency and increased quality to the pharmaceutical industry, and to deliver these benefits throughout the healthcare system,” Valisure has been involved in some high-profile cases, most notably its findings that ranitidine, which was an ingredient of Zantac, a popular heartburn medicine, could develop N-Nitrosodimethylamine (NDMA), a probable cancer-causing contaminant, with the passing of time.

Valisure made the discovery in 2019 while testing Zantac and similar over-the-counter drugs that contained ranitidine, leading the Food and Drug Administration to seek a recall, with which Zantac’s manufacturer and others complied.

“We discovered it, and our accomplishment is getting action,” Kucera says.

She says the current version, Zantac 360, no longer contains ranitidine.

In March, the results of a Valisure test of hand sanitizer for benzene, a known human carcinogen, was released after the FDA allowed an interim limit of 2 parts per million for benzene to help meet the demand for hand sanitizer because of COVID-19.

Valisure tested 260 batches of hand sanitizer products and found that 21 of them, representing 15 brands, contained benzene in excess of the FDA’s interim limit, including three that tested six to eight times higher than allowed, according to CBS news.

Kucera says Valisure welcomes individuals who are uncertain of the contents of their hand sanitizer to send it to Valisure, which will test it.

Their goal is to provide people with peace of mind.

“I have boxes (of hand sanitizer to be tested) on my desk from all over the country,” she says.

Kucera and her husband, Nathan, who works in the pharmacology department at Yale, have been married for 12 years and have two children, Zoe, 10, and Ian, 8.

Kucera’s life journey has pretty much followed an eastward trend. Born in Southern California, she moved to Parchment with her family when she was 12 years old. Her mother, Kelly Killen — then Loomis — was a teacher in Parchment, primarily in the middle school. Killen still lives in Kalamazoo.

By the time Kucera graduated from Parchment and KAMSC five years later, she had completed an honors project in physics at Michigan State University testing the atomic nucleus vibration theory of a Japanese physicist, her work was published in the Nuclear Physics journal and she had competed in the International Science and Engineering Fair in Detroit.

The summer after her graduation, she went to Japan for 15 days to discuss her work on the Japanese physicist’s theory with his graduate students.

After switching her emphasis from physics to biochemistry and earning a bachelor’s degree from the University of Chicago, Kucera went to Yale University, where she received her Ph.D. in molecular biophysics and biochemistry, then took a position as a nontenured faculty member and manager of large grants.

“It was a amazing; it helped me to develop myself as a professional.”

Kucera says she had intended to return to the Midwest after receiving her Ph.D., but jobs were scarce and she and her husband were both offered good positions at Yale.

“I really, really feel privileged to have been raised in the Midwest,” she says. “A long time ago, I decided that if I ever had children I would apologize to them if I didn’t raise them in the Midwest.”

She still enjoys returning for visits from time to time, and has fond memories of her time at Parchment High School.

“Parchment gave me so very, very much in terms of the education that launched me to where I am now,” she says.

In addition, she says she continues to use the skills that were ingrained in her on the soccer field by her coach, Kirt Brown.

“The discipline and teamwork that I learned … (in the soccer program) was phenomenal,” she says.

She adds that she continues to keep an emphasize on fitness in her life, something that is also important to her husband, a runner.

Kucera says she would like to give back to Parchment by helping its graduates and extends an invitation to reach out to her to anyone who has similar aspirations and finds themselves on the East Coast. She can be contacted at kaury.kucera@gmail.com.

“I love helping people,” she says.